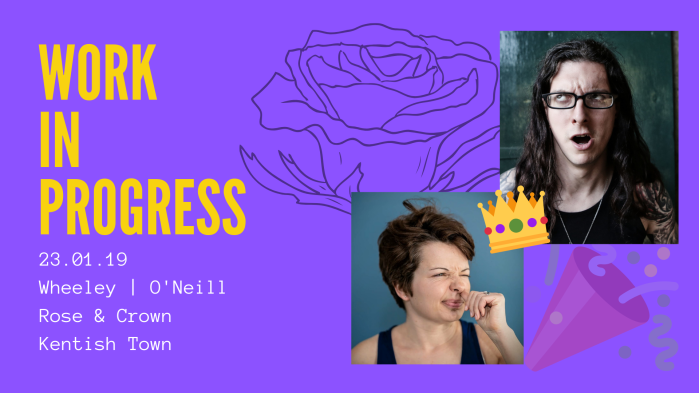 I’m doing a work in progress with the brilliant Andrew O’Neill in January, come see!

In 2015, Rach asked Andrew to make a package about anarchy and economics for Radio 4. They concluded the best way to bring down the government was to vote Tory.

Now Andrew and Rach have bucketloads of new stuff to try. They’ll be aided in their quest by their loyal sound man and an Imperial F*cktonne of Thistly Cross Cider.

Join us to find out what we’ve been up to for the last few months, and whether any of it is funny.

Andrew O’Neill is an award-winning stand-up comedian, musician and writer. He’s been on Never Mind the Buzzcocks, Saxondale and 50 Years Of Rock Excess.

Rach was once in a lift with David Hasselhof. He was wearing a T-shirt which said, “That’s right, I’m not dead!”

Rach was shortlisted for the 2018 BBC New Comedy Award and used to work on the Today programme. She enjoyed mashing bits of it up for jokes and is now unemployed.

Join us for guaranteed January blues-busting comedy or we’ll buy you a pint after.

Rachel is a small comedian from Mordor, South London.

As heard on BBC Radio 4 Extra. Rach has written for Newsjack, The News Quiz and Listen Against. She has appeared on the Reasons to be Cheerful, Worst Foot Forward and Thank Book For podcasts, as well as her own comedy/science pod, Level Up Human.

Rach has chaired for the Royal Institution, gigged for the British Film Institute’s ‘Comedy Genius’ tour and performed at Glastonbury festival with the Ugly Animal Preservation Society.

In 2018 she was shortlisted for the BBC New Comedy Award.

Get in touch at rach@rachelwheeley.com